Around the 1890s, the Hommel Brewery of the French colonisers entered Vietnam as the very first brewery establishment in Hanoi and shaped the beer drinking culture in Vietnam. In 1985, Due to the rising conflict between the North and the South of Vietnam, glass and aluminium were deployed for more important uses than to contain beer and so the beer was put directly into a keg and there was no need for extra packaging, thus becomes the bia hoi that we know today. During which, Vietnamese people were known to make alcoholic drink based on the home-brewed rice wine, however, as the fighting intensified, it was no longer permitted to use rice for alcohol production.

This was a climax point for bia hoi. With rice wine gone, people were starting to pay attention to this strange-smelling foreign drink and the more they drank, the more they got attracted. 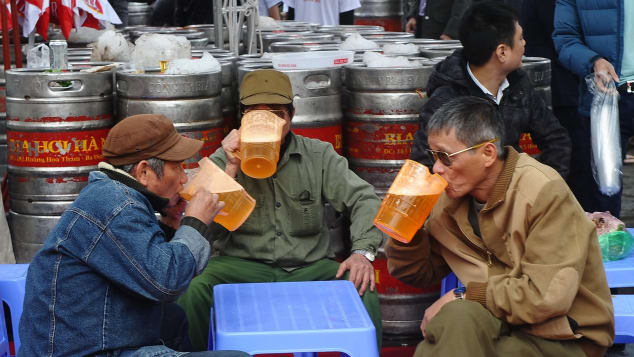 In present time, thousand gallons of foamy and bubbly beer are produced every day. It’s not an uncommon sight to see massive beer kegs are loaded on vans and motorbikes each early morning and watch them steadily transferred to the Old Quarter, the home of Ta Hien street– where beer culture cultivates. Bia hoi is smoothly available next to street food stores offering savoury snacks like grilled pork, salted peanuts, chicken wings or feet and anything salty that can go along with the bitterness and sourness of the beer. With a glass of beer of VND5,000 - 10,000 it’s just simple to cut yourself some slack and release yourself.

Drinking bia hoi has become a signature ritual in our everyday lives. Whether locals or tourists, they would not call it a day without some bia hoi taste at late night. Bia hoi is a chance for friends to hang out and confess stories to each other. It’s a means for drained workers to sit down on old plastic stools for a while and let go of their anger and annoyance while leaving good taste in their mouth. It’s a perfect way to end a day and to refill oneself for the advancing tomorrow.